Our main office is located close to the capital city of Botswana, Gaborone. We also have a research and education field camp situated in the Ghanzi farmlands of the western Kalahari, and an education base in Maun, just south of the Okavango Delta. 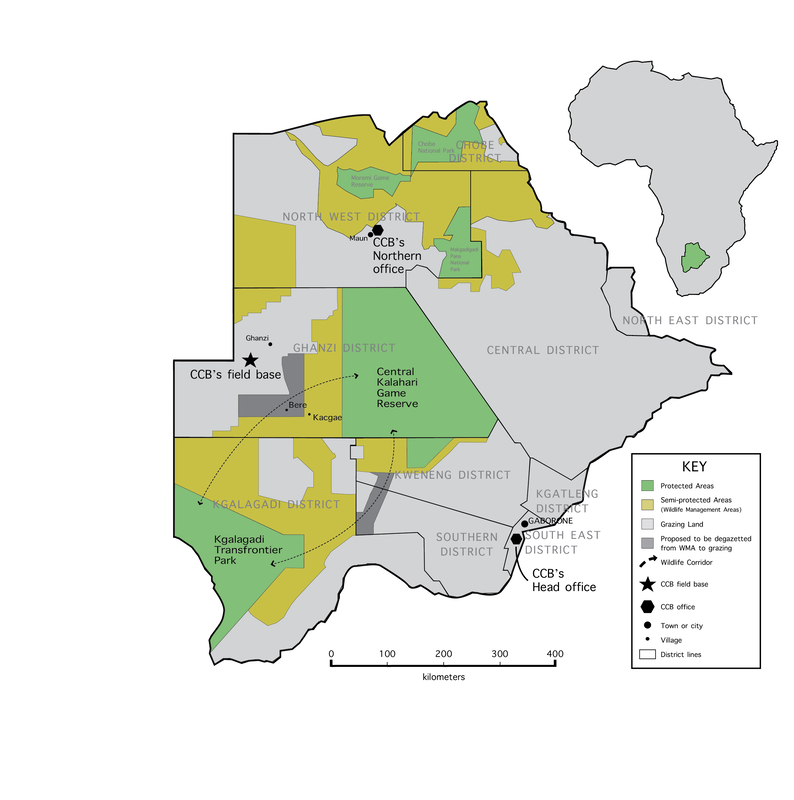 About Botswana
Formerly the British Protectorate of Bechuanaland, Botswana achieved full independence in 1966. It has continued to enjoy democratic governance since that time and was economically transformed by the discovery of diamonds in 1967. With a population of approximately 2 million people, Botswana covers an area of some 582,000 square kilometers and lies at an elevation of 1000m. The Kalahari is a semi-arid expanse that covers over 80% of the country.

Botswana’s first human inhabitants were the Kalahari San (known as Bushmen), who are believed to have inhabited this area of southern Africa some 30,000 years ago. Today, the Batswana inhabitants descend from a number of Tswana tribes and a multicultural society is further made up of immigrants from other southern African states, as well as from Europe, North America and Asia. The official languages are English and Setswana. The most widely spoken language is Setswana – the first language of about 90% of the population.
​
Wildlife is abundant in Botswana, taking advantage of the presence of varied ecosystems. Though most of the country is characterized by scrub brush and savanna grassland, there are also small areas of forest. The Okavango Delta and Linyanti wetlands, in the north, provide habitats for nearly all southern African mammal species and many rare birds. Most of the African cat species are found here and Botswana is also home to the world's largest populations of African wild dogs, elephants and brown hyaenas.

​The nation also boasts one of the largest remaining populations of free ranging cheetahs in Africa.